First Image of Oeric I drew. Not completely accurate, but close enough.
Once again new week, new thoughts. I think I want this to be more of a monthly thing than a bi-weekly thing. More thing change month to month than week to week. Plus, I don't want this to fizzle out like blog writing. I suck at that.

My leaving RoyalRoad is giving me more time. It's allowed me to pull the camera back and examine my adventure on it. And to be honest, I only joined as it was described as the best method of gaining readers. And that's what I thought I wanted was readers. However, need the right kind of readers. Those who are interested in my work and at the moment, and like before. I'm not sure where they are at. In fact, I wonder if they truly exist.

At one point, I felt there was a space for all sorts of story telling. And this was in the early 2010's. Where variety was a thing. You know, before the world of algorithm and every big media company just wanting to play it safe. I feel if I had published then, I would be in a better spot.

Now I don't know what to do because there is no real advice for someone like me. It just the typical rather useless advice of just keep, going, just keep plugging away. There will be growth. I can't say that there was growth on my stories. Everything tended to level off at a certain point, because everyone looking for stories not like mine. Nothing is like my writing, thus making the whole endeavor of being on RoyalRoad pointless.

So where am I? Am I at a crossroads, a wall, or have a mountain to climb? Well, I'm always climbing a mountain as a dyslexic writer. The mountain doesn't go away. However, at a crossroads, no. Am I withdrawing from the greater world of web serials? Yes. I'm changing gears. I plan on releasing Eroden as a full release and everything after that. I need to stop pretending I'm a serial writer. Just go back to being novelist. Maybe I'll give indie publishing a try. Just skip the web novel step. I see no benefit for me.
Let's talk about fun things. Let's talk about books!

Lore Olympus is a favorite of mine on Webtoon. It is the first comic I've actually bought outright because I like it so much. The style of art is so unique. The romance in it is more of my style. A taste of the fantastic and realism. And it's amusing, with most of the characters feeling real in what they are. I'm not showing artwork inside because quite honestly, you can read it on webtoon. I've other favorite on there. Such as SubZero, My Giant Nerd Boyfriend, Tori, and Samuel, The Witch and the Bull, When Jasy Whistles, Mao Daily, Pixie and Brutus, Empyrea, and You've Gotta be Kitten Me!
I discovered this series last year and randomly. What is this about? It's about a library secret society. However, instead of it just being in our world, it's a universal secret society library. The main character is a librarian and this series is about her adventures and her dragon apprentice, as well as a wannabe Sherlock Holmes. This is the only multiverse series I approve of. I have books 1-4. I'm reading The Burning Pages next after I get done with To Sleep in a Sea of Stars. I've thoughts on this story. I'm holding off opinion until after I finish it. 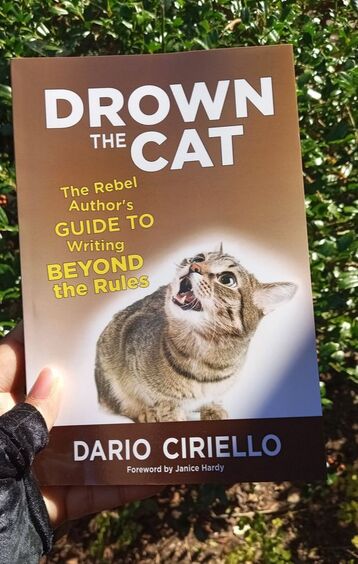 Then there is this book. I'm going to try to read it. I'm not so keen on how to write books. None of them really speak to me or compute, or I care for. Like every writer on r/writing my worship, Stephen Kings, On Writing, it's just not for me. However, this is for the rebel writer. And I am a rebel writer. Maybe there is something here.
Before I go, let's talk about Pantheon.

I do believe this season has ended because all I saw was 8 episodes credited to the voice actors. It's a really good series and I hope, AMC+ isn't its downfall. I really adore the show and I'm not certain where exactly the show is going. However, it was confirmed it was getting a second season. I don't know when it going to come out but, I shall be waiting with excitement because it's a good show that no one is talking about. It probably came out at the worst time you know with more Game of Thrones, and more Lord of the Rings. However, it is worth the watch if you tire of the same franchises and IPs getting sequels, prequels, and rebooted. And really like what if scenarios type sci-fi.

This fine fellow does a good job talking about the series.

While I'm on break, I'm going to see what I can do to spruce up this website.

Until then God bless